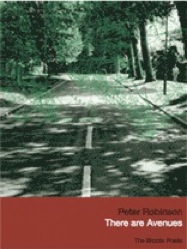 This longish poem is a series of prodigal’s returns to the city of Liverpool where I was first brought at the age of three, and to which I’ve been returning ever since. The literal avenues of the title are a set of intersecting roads and dual carriageways in the part of South Liverpool between Allerton and Garston. Forthlin Road, in part one, is the street where Paul McCartney spent some of his childhood. Menlove Avenue, referred to in part ten, is where John Lennon grew up with his aunt. I first walked up and down those tree-lined boulevards and lanes in the spring of 1967 when my father became vicar of St. Michael’s Garston. The poem began in December 1984, with the following lines sketched in a notebook: ‘Freshly washed, the cold red tiles / of mother’s kitchen floor / were lain with sheets / of newsprint for our muddy feet / ... they slipped / and crumpled as I lept / between them’.

There are Avenues was completed during 2004.