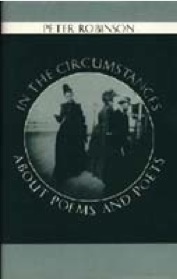 In the Circumstances: about Poems and Poets

In the Preface to this book of nine chapters on Wordsworth, Auden, T. S. Eliot, Hardy, Lowell, Hill, Montale, Pound and Browning, I wrote that each piece 'is differently engaged by the idea of other lives in poems, and poetry as a response to other lives and the otherness of those lives. Thus each considers the bearing in upon poems' textual context of contextual circumstance, of the world from which the poems arose and to which, in the first place, they returned. This world emerges in such things as allusions to political events of the day, the inclusion of proper names, and the individuation or absorption of others' words within the words of poems.' Though, looking back, this hardly strikes me as a contentious way of reading and living with poetry, the book was fiercely travestied and denigrated by Terry Eagleton in The Guardian. Donald Davie was allowed over a page in the London Review of Books to commend the work ('demanding and tough-minded essays') and to take issue with it, while Mark Wormald in the TLS tried to damn it with faint praise and Ralph Pite came to its defence in the Cambridge Review, pointing out some of the travesties that Eagleton had perpetrated. As Davie noted, I wasn't 'bidding to be the flavour of the month' with this book of essays written by a young poet trying to find his way. What the reviews by Davie and Wormald counselled in passing was that I should have put in more jokes and had less footnotes.