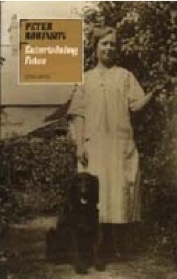 After the relative success of This Other Life, the reception of my 1992 collection from Carcanet came as a disappointment. It received only one notice, in PN Review, and that one distinctly negative. T. J. G. Harris wrote a long piece attacking the book for 'a self-absorption amounting almost, if not in fact, to solipsism'. The piece came out as I was recuperating from a brain tumour operation, and upset me far more than it should have. It is the only time I responded to a review with a letter to the journal. My reply was published alongside one by Stephen Romer equally critical of the review in which he concluded by writing: 'I should also like to express my distaste at his excessively unjust (and verbose) account of Peter Robinson's poetry. In both Robinson's books, This Other Life and Entertaining Fates, intricate emotional engagement with other people is the very heart of the matter. Harris's charge of solipsism seems to me absurd.' Yet a 1989 TLS piece by Giles Foden reviewing the small press edition More About the Weather (a book in which some of the Entertaining Fates poems first appeared) concluded by noting that 'Robinson quietly displays great skill in representing natural detail and the way it can seem to bear on our most private and troubled moments' - which sounds like a positive way of describing what in poems like 'More About the Weather' Harris found so hard to take.