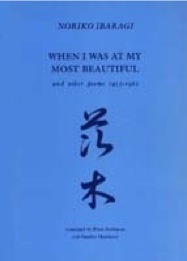 This small press edition of thirty-two poems translated from the Japanese came about because my co-translator's English husband-to-be had a connection with the press's editor and suggested that it might be a nice book to produce. The translations had been done a year or so earlier as an attempt to improve my Japanese and find something out about contemporary Japanese poetry. Fumiko Horikawa would provide me with literal versions, or help me to piece together a reading of the original text, and I would re-write the English as best I could. Though I don't think this is the best way to translate poetry, it was the only practicable approach to the task at the time, and I learned a lot from it. A number of the poems, including 'A University Graduate Housewife', seem to me to find plausible English solutions to problems thrown up by the tone, both genial and mocking, of Ibaragi's originals - and I will certainly include a few of these versions in a selection of my translations, should the occasion arise. This book, with its frontispiece photograph of Noriko Ibaragi aged nineteen in a kimono, has become all the more evocative since the early death of my co-translator, Fumiko Horikawa.