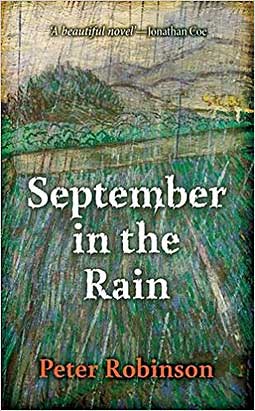 September in the Rain

September in the Rain is a first novel and identifiably of this genre in that it draws substantially for its plot and circumstances upon events in my – and not only my – youth. The relation of its plot to lived experiences is briefly summarized. The sequence of key happenings which occurred between May 1975 and January 1976 is retained, though not narrated chronologically in all cases, but the back stories of the main characters and much of the incidental detail has been changed, adapted and simplified, so as to round off and fictively locate the real events which are imaginatively narrated. Naturally, there are many critical issues that might arise in considering this way of writing a novel, some at least of which are addressed, whether tacitly or overtly, in the course of the book. A good forty years separate its publication and the drafting of the earliest sections to survive, more or less intact, into the final version – which benefited from a great deal of advice over that protracted time.

Naturally enough, I wasn’t writing it incessantly for much of that near half century. A brief chronology of composition would look like this: late 1976, the first passages written; 1979-85, the eight poems in This Other Life (1988) and other related drafts composed; 1985-86, a third-person first draft of the novel completed; 1987-9, a first-person version made; 1990-91, a revised version with the title September in the Rain composed; 1999-2001, a re-revised version with additional opening and closing passages and chapters made; 2013-16, the structuring in two parts, a partial reordering of chapters, the second-person address introduced, and a line edit completed towards publication.

Various attempts to publish this novel, beginning in the late 1980s, ran into the sand, and involved a series of experiences with editors and agents that also had a part to play in its evolution. I had more or less stopped expecting to see it appear when contacted by the editor at Holland House about something else. I am happy to report that it has sold beyond my expectations – though at least some of these sales, it must be admitted, derive from online purchasers mistaking it for a work by my namesake, the author of the Inspector Banks series. So, be warned: although September in the Rain circles around a crime involving sexual violence at gunpoint and contains scenes from a criminal trial, it does not have the pace of a thriller, or the denouement of a whodunit. It is a moderately paced Bildungsroman in which the events themselves are not so much the locus of significance, as, rather, a test for the capacity of its main characters to survive and develop in light of them or, perhaps better, in their shadows.

Ian Brinton on September in the Rain by Peter Robinson: Read