With his parents eating ice cream, 1963

I was born on the 18th of February 1953, four days late, my mother tells me, in Hope Hospital, Salford, Lancashire, the first son of a curate in the Church of England and a geography teacher who had left her job to be the wife of a priest. My parents are the first generation in their respective families to go to university (they met at Durham) and the house, without being especially literary, contained plenty of books, a piano, and some reproductions of paintings.

I grew up in my father's parishes, poorer urban areas of Greater Manchester, Wigan, and Liverpool. The last of these is the place that I think of as home — because I left Manchester when I was three (approximately the age in the small photograph taken beside my dad's first church in Liverpool), because we only spent five years in a Wigan still recognizably George Orwell's, and because I both passed the largest part of my childhood and youth in Liverpool, and because we still visit the city three or four times a year to visit my parents. 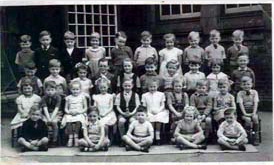 My primary education took place at Linacre Infants and Junior School in Bootle. In the class photograph, I am the one in the middle on the front row. Then, at St. Catherine's School, Wigan, I passed my eleven-plus (as it was called) and went to Wigan Grammar School, where I was fairly unhappy, had my first teenage sexual experiences, and had a front tooth knocked out playing football. This phase ended in the spring of 1967 when my father moved to his final parish, St Michael's, Garston, in south Liverpool.

One of the perceived advantages of this move was that he could send his sons to Liverpool College, which had special arrangements for the children of clergy to pay half-fees. So I ended my secondary education at a provincial public school, but one which had a good set of English teachers and a fairly literary sixth-form atmosphere. As I have said elsewhere, between the ages of fifteen and seventeen, writing poems developed from a kind of prank into an obsession. My first printed verses were in sixth-form publications, and I was awarded a school prize for a sheaf of poems. Two other poets, Grevel Lindop, whose younger brother was in my class, and Jamie McKendrick, who came to the sixth form after I left, both passed through the place — and they appear in my anthology Liverpool Accents: Seven Poets and a City. 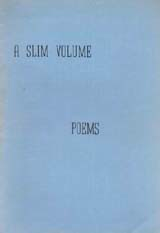 Privately printed in York in 1972

In September 1971, I went to York to study a joint degree in History and English Literature, but changed after the first term to an English Literature degree that included a compulsory foreign literature element (I studied the French Symbolist poets) and an optional paper in the painting of Rubens and Rembrandt. There I published poems in the student magazines, and a couple of pamphlets of juvenilia shared with another student poet, Hugh Macpherson (1953-2001), and my girlfriend, later first wife, Rosemary Laxton. I gained a first class degree in English and Related Literature in June 1974 — but hadn't been confident that I would do well, so didn't make any plans for the following year (intending anyway to take a break from education).

After spending the autumn living with Rosie Laxton in Bradford and working as a clerk for the Department of Health and Social Security, I followed her to London the next spring and found a job as a hospital porter at the National Hospital for Nervous Diseases. The events of this year, and in particular the sexual assault which I witnessed at gunpoint in September, were to form the material for some of the poems in This Other Life and to provide the plot outline for my novel, September in the Rain.

Rosemary Laxton in the Dordogne in the mid-1980s

In the autumn of 1975, I began work on a doctorate in modern poetry at Cambridge, and became involved with the poetry scene in the university and town. This was how I came to co-edit the seven issues of the magazine Perfect Bound between 1976 and 1979. At the same time I joined the Cambridge Poetry Festival Society and subsequently performed various organizational functions in festivals between 1977 and 1985. It was because of this experience that, in 1988, Maura Dooley invited me to act as her advisor for the first of a new series of Poetry International festivals at the South Bank Centre in London. My doctorate was finally awarded in 1981 for a thesis on the poetry of Donald Davie, Roy Fisher, and Charles Tomlinson.

In February of that same year, I took up a temporary lectureship at the University of Wales, Aberystwyth — a post left in June 1982 when it became clear that the position was not likely to be made permanent. At this point, my wife (we had married in 1979) was working at St Christopher’s Hospice in Sydenham, South London, and, since my job was temporary, I spent those years commuting between West Wales and the capital. This difficult period came to an end when I was offered a stop-gap lectorship at Trinity College, Cambridge, by which the commuting to teach was at least made more practicable. 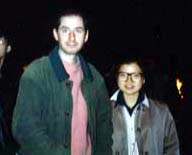 With Fumiko Horikawa in Nagoya, Japan at New Year 1990

We moved back to Cambridge in 1984 and bought a cottage in the village of Fen Ditton. Over the next four years I made numerous attempts to gain full tenured employment, but without success. This was the period when I co-edited the magazine Numbers with John Alexander, Alison Rimmer, and Clive Wilmer. In the summer of 1988, I was offered a visiting lectureship at Kyoto University for two years. The plan was for me to go to Japan alone, complete some books, and earn a proper salary, then return to England. 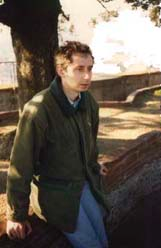 On the Torre Guinigi in Lucca 1991

However, while there, I was offered the post as visiting professor at Tohoku University. There is an intermittent tradition of having English poets as visiting lecturers in the department: Ralph ("How delightful to meet Mr") Hodgson was here, as was George Barker, in the only job he ever held, just before the war, and then in the 1950s, James Kirkup. Finding my feet, it became possible for us to think of transferring our home base more permanently to Japan. The failure of this plan was among the things that precipitated the end of my first marriage, and the relationship was in the process of finally unravelling when I discovered at the City Hospital in Sendai that I had an acoustic neuroma, benign brain tumour on the right side of my head. 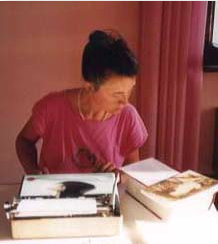 I returned to England to have the operation at Addenbrooke’s Hospital, Cambridge, in May 1993. The surgery was successful, but is hard to recover from; yet, despite a serious relapse in July, I was able to return to Japan in mid-September to take up once more the post that had been kept open for me thanks to the direct intervention of two colleagues, Hiroshi Ozawa and Yasushi Saito. By this point, I had made contact once more with Ornella Trevisan, whom I first met in Cambridge in 1984. She returned with me to Japan and helped with the long convalescence that brain surgery entails. We were married in February 1995 at the Italian Embassy in Tokyo after my divorce came through, and now have two daughters.

After fourteen years in Sendai, we moved to Kyoto in March 2005. Our time was for two more years divided between Japan’s old capital, during university semesters; Parma, Italy, where my wife's family is from, during much of the vacations; and England for shorter visits at least three or four times a year. Though this three-cornered life involved regular long-distance flights and a certain amount of disruption, it also kept us fresh and provided a number of unusual perspectives on the world, not something that a writer should be inclined to undervalue. 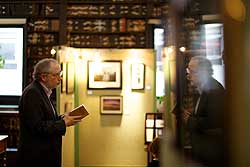 Reading at the Portico Library in Manchester in 2012

In late March 2006 I was offered and accepted a chair in the School of English and American Literature at the University of Reading,  Berkshire, England, and we have now simplified our life into a two cornered one since the early spring of 2007. Since returning to Reading, as well as founding the creative writing pathway and leading research at the university on poetry and poetics, I have organised a centenary conference on the work of the poet Bernard Spencer (1909–1963), instigated the publication of an annual creative arts anthology, and helped found the Reading Poetry Festival. I am poetry editor for Two Rivers Press and literary executor for the estates of the poets Roy Fisher (1930–2017) and Mairi MacInnes (1925–2017).

A regular contributor of book reviews and literary criticism to poetry magazines, academic journals, and newspapers, I have presented and discussed my work in many parts of the world, giving talks and readings in Chicago, Los Angeles and New York (USA), Hiroshima, Kobe, Kyoto, Tokyo, Sendai and elsewhere in Japan, Sofia (Bulgaria), Kristiansand (Norway), Prague (Czech Republic), Vienna (Austria), Milan, Parma, and Massa Marittima (Italy), Paris (France), Heidelberg (Germany). Niksic (Montenegro), Elche and Moguer (Spain), and all over the United Kingdom. I have also taken part in a number of programmes on BBC Radio Berkshire, Cambridgeshire, Bristol, and Merseyside, as well as on BBC Radio Three.